The Quell Foundation proudly announces that its 2018 Masquerade Ball was the best year yet as it raised nearly $900,000 to fund the Foundation’s scholarship program and the “Lift the Mask” documentary campaign. The event, held at the Newport Marriott in Newport, R.I. and hosted by emcee John O’Hurley, is the third event of its kind organized by the Foundation.

“The generous support of our sponsors and patrons is overwhelming,” said Quell Foundation CEO, Kevin Lynch. “Because 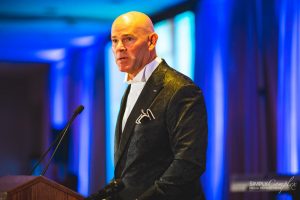 of events like the masquerade ball, The Quell Foundation is establishing the next generation of mental health care workers and advocates. This record-breaking number comes to us at a pivotal time for mental health in America and our journey as an organization. We are deeply grateful and look forward to continuing our work towards removing the stigma around mental health illness.”

Founded in 2015, The Quell Foundation’s unique approach to supporting mental health is making a difference. The organization awards three types of scholarships and, since its formation, distributed over $800,000. Quell scholars represent 40 different states and over 100 different universities and colleges around the country.

Michael Kearney (Hartford, Conn.) shared the story of his son Marshall’s suicide and how his son’s tragedy has encouraged others to “pay it forward” by sharing acts of kindness with others around them.

Brooke DuBois (Scituate, Mass.), honored with the 2018 Quell Foundation Achievement Award, told her story as a young teen and the day-to-day pressures of competition and perfection that are placed on our young adults, creating a group plagued by anxiety, stress, and depression. 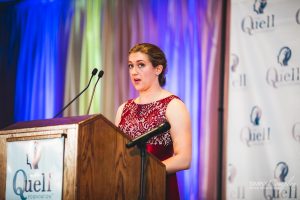 Cynthia Temeles (Fairfax, Va.), a Quell Foundation Scholarship recipient, spoke eloquently on her personal story with suicide, stigma within her own family and her journey with mental health.

“The story-telling element of the program humanized the experience of mental illness, thereby normalizing the conversation,” said the Foundation’s Executive Director Renee Wilk. “Many of our scholarship recipients attended the event, providing our benefactors the chance to engage directly with the next generation of mental health care professionals and to see, first-hand, the impact their generosity has on the lives of others.”

The evening included appearances by therapy dogs from Gaits of Harmony Therapeutic Riding (Ashaway, R.I.) and St. Mary’s Home for Children (North Providence R.I.) who were on hand not only as exciting dinner guests but for speakers and guests to use if the need presented itself. The evening concluded with dancing and live music, thanks to local favorite The Sultans of Swing.

The Foundation’s 2019 Masquerade Ball is scheduled to take place at The Rittenhouse in Philadelphia, PA November 9th.

About The Quell Foundation, Inc.

Based in North Falmouth, The Quell Foundation works to reduce the number of suicides, overdoses, and incarcerations of people with mental illness by encouraging people to share their story, increasing access to mental health services, and supporting first responders in recognizing the mental health warning signs among their own. Visit www.TheQuellFoundation.org to learn more about the Masquerade Ball, the “Lift the Mask” documentary or for general information about the Foundation.