Are you ready to Run for Peace of Mind and #RemoveTheStigma of #mentalhealth? The Quell Foundation is proud to announce that we are currently accepting applications for our charity bib at the 2020 TCS New York City Marathon! Last year, Lori Riggles from Alabama donned the “Remove the Stigma” jersey and ran the 2019 Boston Marathon in honor of her daughter.

Below is Lori’s story of inspiration. 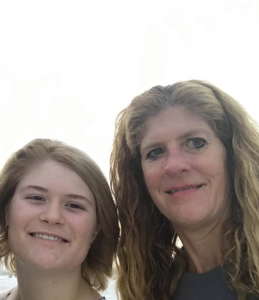 depression in 2016. By early February 2019? It had become an endless uphill battle that I had never expected. Emily and I wanted to complete psychological testing to be accurately diagnosed, and my insurance would not cover it. After examination, Emily, at 14 was diagnosed with anxiety and depression.

She was matched up with endless therapists who specialized in everything BUT depression and anxiety. When she was prescribed a medication that never fit her symptoms in the first place, the doctor kept increasing her dosage. Emily continued to decline, as I watched, prayed, and worked overtime to get her the care that she needed. It seemed impossible, and this only begins to describe Emily’s battles. Stigma and Medical mishaps continued as she fought, and I fought for proper treatment.

Boston was the last thing on my mind in January 2019. One sleepless night, I randomly opened the Boston Buddies Facebook page and saw the post about an open bib through Quell. I commented that I would apply, but felt there was too much going on my life actually to go through with it.

Two weeks after seeing the post, Emily hit rock bottom. In the aftermath, Emily decided that she wanted to recover-no matter what it took to get there. She told her therapist and me that she needed to be in a psychological ward to be taken off the medicine. She didn’t trust herself to do it without help.

Emily returned home on February 4th. I found out that I had received the bib, as she was being discharged from the hospital. Emily is strong, determined, and persistent in her fight to save herself and improve the future for mental health. I run for my Emily and all of those and their families who need better care for mental health.