Through open, judgment-free dialogue, we can remove the stigma of mental health. Caitlyn Spurlock, a three-time Quell scholar and recent graduate from Penn State University and a member of The Quell Foundation’s Jr. Board of Directors, reflects on her mental health journey in honor of Mental Health Awareness Month.

They say college is the best four years of your life. It’s a time filled with 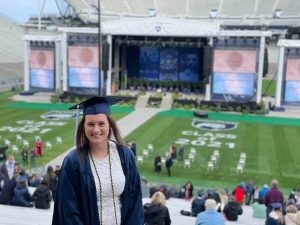 exciting adventures, independence, new friendships, memories, self-discovery, and much more. As I just wrapped up my undergraduate journey at Penn State, I can’t truthfully say it was the best four years. Still, it was four years filled with valuable lessons and everyday experiences I had with more people than I could have imagined.

On October 6th, 2015, around 4 p.m. my life transformed into the unimaginable. One moment I was playing in a high school soccer game, and within seconds I woke up on the ground to athletic trainers bombarding me with questions, “what did you have for breakfast today,” “what year is it,” and all other questions to test for a concussion. It was my third concussion, so internally I knew I had a concussion and didn’t need a test to prove it. Months after rest, rehab, and lots of hope that I’ll be able to get back onto the field, doctors told me that I could no longer play contact sports due to permanent brain damage. That is the last thing I remember the doctor saying. Soccer was my life and the only thing I knew. I was so close to fulfilling my dream of playing in college. As if the removal of soccer wasn’t enough, my academic future was also in question. I wasn’t going to let doctors take two important things away from me, and I proved them wrong by attending Penn State in the fall of 2017.

My journey doesn’t end there, though. In the meantime, I was diagnosed with anxiety and panic disorder. It was manageable in high school with cognitive behavioral therapy, so I figured college wouldn’t be different. But boy, was I wrong. The courses only heightened my anxiety and perfectionist attitude, and for once, I started to see I wasn’t the same person as I was pre-concussion. My memory, attention, and studying skills were weakened, forcing me to put more effort and learn new ways to succeed, only to still let me feel like a failure. No one – even those closest to me – knew my struggles until my life was on the line. My anxiety snowballed into depression and further into suicide ideation in the spring of 2018. I was embarrassed and felt as if I was a burden. I received hourly (if not sooner) calls and texts from my mom constantly asking how I was and had to give updates, including when I got into and out of the shower. I lost my self-identity and no longer felt as if I was a college student.

When it rains, it pours, but a rainbow came out at the end. That rainbow appeared at the perfect time. Around the same time, my brother was receiving an award at Penn State, and Kevin (Lynch) just so happened to be handing out the award and introduced The Quell Foundation to my family (so in retrospect, I owe it all to my brother). I couldn’t accept my diagnosis and the concept that I had a mental health disorder, so I kept the communication distant and let my mom handle it. Through constant contact with Kevin, I attended the 2018 Masquerade Ball in Rhode Island with my mom, where it was the first time in three years, I realized I am not alone. There are other people out there just like me who are going through the same thing.

Now, this is not to say the one masquerade ball cured all. I was extremely overwhelmed, and it took me a little bit to process and take it all in, but the embarrassment started to shed, and the acceptance started to soak in. I kept Quell in my back pocket, kept in touch, and attended the next masquerade ball in Philadelphia. The full acceptance and comfortability didn’t completely set in, but I didn’t feel as embarrassed to talk about my diagnoses. Little by little, my mask slowly started to lift. I am fortunate enough to be a three-time scholar recipient and had the opportunity to be a part of Team Quell as an intern in the summer of 2021.

Within the beginning weeks of interning, I was able to lift my mask completely. I felt comfortable with who I was and was not afraid to be open about my past experiences and recent diagnoses. This moment allowed me to excel in developing the Psychiatry Residency Population Mental Health Curriculum at the University of Washington and the podcast Lift the Mask – Voices of Heroes in the Silent Pandemic. My involvement didn’t end there, and I am thankful it didn’t, as I am a member of the Junior Board of Directors, where I am fortunate to have the opportunity to give back to the foundation that gave me my life back.

Finally, I am proud to say regardless of what the doctors told me back in 2016; I graduated from Penn State University with a Bachelor of Science in Biobehavioral Health and a minor in Psychology. This fall, I will begin my path to become a psychiatric/mental health nurse practitioner at Regis College in the Direct-Entry Masters Nursing program.

Are you interested in sharing your story with The Quell Foundation? Email liftthemask@thequellfoundation.org to learn more.